G = Grammar A to Z Challenge 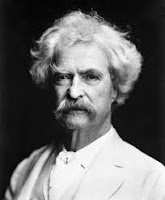 In a time when slang & niche speak find their way into the dictionary at record speed, it may seem that grammar is optional. Some writers have suggested that grammar is no longer relevant. But, seasoned writers know that grammar is only required if the writer wants to be considered literate.

Grammar is the framework on which we work. Like a home builder who sets the house on a foundation, writers set their work on the foundation of language and grammar. Once a writer knows the rules, they are free to bend or even break them. However, the well-trained writer knows that for rule breaking to work within a piece there must be sufficient reason. Without a sufficient reason the writer risks alienating their readers.

Until Mark Twain there had not been much writing with colloquial Missouri dialect. Twain broke grammar rules to the delight of the reading public. It was quite a risk but it worked. It worked so well that Huckleberry Finn and Tom Sawyer are named as great American Literature.

Twain's rule breaking worked because his readership understood he was a literate writer, a prominent newspaper man and author. The dialect had purpose in telling the story. So they agreed to breaking the grammar rules in the dialogue.

Mark Twain proved that once the writer has full command of their craft they are free to play with language.


If you find grammar humorous, check out these sites:

Labels: A to Z, Writers

Ah, grammar. If you haven't yet checked out Grammar Girl, do. She is most helpful and often humorous. If you like grammar humor, that is.
And really, you'd have to be a DOORKNOB not to get grammar humor. *grins*

I look back and thank all of my English teachers for their work on teaching me grammar. I think it is a foundation for reading and writing. Sadly, that foundation is eroding in schools today. Good G post.

Grammar and spelling are fundamental concepts that are lacking today. Like Joanne said, they're the foundation for all reading and writing. Nothing irritates me more than seeing egregious spelling and grammar errors in normal communication. Texting? Well, that's a horse of a different color...
Nice post! Following!

Favorite quote from Mark Twain: "If it sounds like writing, re-write."

"But, seasoned writers know that grammar is only required if the writer wants to be considered literate." Reading that just made my day! I love this post.

I found your blog on the A to Z list. It's very nice to meet you.