My Answer to the Ice Storm 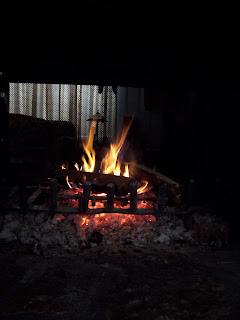 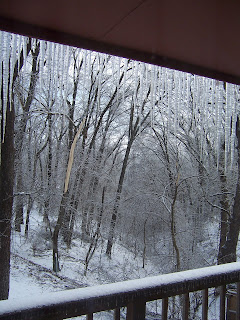 Posted by Kate OMara at 4:50 PM No comments:

For me: I married at 18, was a divorced mother by 19. Finding the way, for my son and myself was difficult. Without guidance, I went to the school of hard knocks, which gained me the gift "discernment" by experience. At 21, just becoming an adult, I recognized the benefits of walking the Road of Happy Destiny and set about making amends for past mistakes and truly living as Jesus instructed and God intended.

The story of the prodigal son has always brought tears to my eyes. Partially, because I am found, out of a generation lost, and in spite of my best effort, my first son is lost to me, not unlike the Biblical prodigal to his father.

During Lent and Easter, I am reminded of His Sacrifice for the Lost and of the Joy of Being Found.

May the tears of today,
Water the flowers of tomorrow,
And bring Light to the eyes that behold them.

Submitted, this day, for print publication.
Posted by Kate OMara at 9:34 AM No comments:

Function of the Soothsayer

In the old days, there were people, men & women who were "unlikely advisers" to the power elite. They were called many things but most commonly we hear of them as soothsayers.

The soothsayer had special talents beyond that of most men. While the powerful made the decisions that impacted the whole of the society in which they lived, the soothsayer could help the elite keep a balance and avoid supernatural retribution.

Soothsayer Talents included interpretation of weather, of dreams... in an effort to obtain fair weather for good business, to achieve goals.

When the power elite were out of balance, weather and storms would turn nasty toward those areas that were under the power elite's control. People would ask, why the ocean storm destroyed a city? why the bugs ate the crops? why the vermin spread disease? why the ice came three years in a row? why the heat burned the ground?

In the Bible and other ancient texts, we read that both dream interpretation and deciphering weather and natural "disasters" correctly helped to appease God and temper the climate, both in nature and in business, for the betterment of all.

It's all about balance, indeed, every generation is sent soothsayers, people who can see the forest and the trees, that understand the yin & the yang, understanding the balance of life as a whole, not only as it appears on a spreadsheet.

Today, we see the value of business plummet, the weather completely out of control, and the soothsayers know the relationship between the two and how to remedy the situation. But where are they? They're an undiscovered resource, just waiting to be asked... in other words, the soothsayers are unheard because they're unemployed...
Posted by Kate OMara at 1:30 PM No comments: 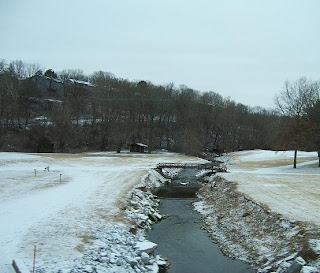 Amazing what a bit of snow can do for a golf course.


Woke up to the silence of a world covered in snow. Once the salt trucks made their rounds salting the roads like a baker coating a cake in powdered sugar, the traffic started, barely audible, growing to the clear hum that marks our modern day background noise, resumed but at a subdued winter level.

The bridge to the golf course green, now white with snow, stood framing the frigid waters of the Little Sugar Creek. Not cold enough to freeze the flow but cold enough to keep the colorful song birds in their nests for the day.

Henry VIII came to power when he was a teenager. His administration was set by his father and for the first third of his reign he relied heavily on his father's administrators to guide the country. The King kept himself busy with games both on & off the field, dressing very elegantly and sampling new thought, and new culture.

If it was new in Europe, Henry wanted some and he wanted some created locally if possible. He was a forward looking youth, schooled in philosophy more than kingship, he set the economy for many areas of England.

The first portion of his reign, he was married to his brother's widow, Katherine of Aragon.

Once recognizing his manhood and kingship, he took control of England. This second part of his reign, one might call the wife years, as he went through several wives in an attempt to satisfy his yearning for an heir.

Wife #2 Queen Anne was so exciting. Her faction that she brought into power with her was ruthless. But the group along with their Queen fell out of favor and either made the mistake of being unfaithful to the king or was set up. No matter. The cost for the political misstep was her head.

By the later part of Henry's life, he trusts no one and plays each of the factions against the other mixing politics and religion with court life. Quite the exciting combination until he's exhausted, unwell and seriously overweight.

The end is sad, he dies. But we all die in the end.

Some of the information was absolutely fascinating. Tidbits about cleanliness ordinances King Henry put into place were tale-telling: There were indoor toilets and sewers, which makes the 16th century seem more civilized. Along with some of the following rules that I wish applied in all restaurants today. "Don't piss into the kitchen hearths." "When cooking, don't sweat into the food."
Posted by Kate OMara at 5:42 PM No comments:

This particular series wouldn't be among my personal selections. However, it is what all the teens are reading. It behooves adults to stay current with the cultural themes and messages sent to our youth.

The parent generation have been so marginalized that very few of an outstandingly large, talented and competitive generation have had any input at all. Most have succumb to the current pressures, leaving the country in the condition it is and the marginalized complete not-responsible for any of it.

The arguments against this series are from anti-vampire contingency. While I wouldn't count myself in the pro-vampire crowd. I do admit to eating Count Chocolate Cereal as a kid and watching old Lugosi movies with that thrill/dread anxiety that I seemed to have enjoyed at a teen.

This series is better than the B-movie horror flicks I watched on Sunday afternoons. The books encourage teens to read. The movie might entice teens who don't read to pick up a book for a preview of the next few movie that are inevitable.

And it's romantic with out being romance novel-esque, i.e. trashy or sexually graphic.

The following is my small contribution to Good Reads.

View all my reviews.
Posted by Kate OMara at 9:12 AM No comments: