In an unprecedented move today, Oil Companies collectively agree that walking is a preferred mode of transportation for most citizens. The loosely associated collective of behemoth companies have agreed to price their commodity completely out of the reach of most citizens sending the recent statical trend of increased reserve and reduced consumption to spike drastically.

While getting to work may be a problem for most people, an oil company spokesperson said, off-the-record, “our people aren’t really the concerned with the general population or the economy. Quarterly profits will be up and people will have to figure out how to pay or walk.”

When asked if this won’t adversely affect the company in the long term, the anonymous spokesperson said, “The point of raising prices is more profit now. It should be evident; we have no long term plan.”

Back to you in the studio…
Posted by Kate OMara at 4:09 PM No comments:

Alan Alexander Mine was born this day, 18 January, 1882, had he lived, he’d be ridiculously old. During his time he produced some of the most loved children’s literature of our age. Winnie-the-Pooh and House on Pooh Corner have entertained and inspired children since their publication in 1928 and 1929 respectively.

As most people know Mr. Milne’s inspiration was his son Christopher Robin Milne who asked the author to write about a five year old boy. The character was called Christopher Robin and was not too different from, that is to say, was similar to the real boy.

Winnie-the-Pooh, Pooh for short, has had an amazing career. Being picked up by the Disney Company as a principle player, Pooh has had more adventures than Mr. Milne had ever dreamed. Most recently, Pooh adds to his resume, the 'Adventures of Winnie-the-Pooh' ride found in the Critter Country area of Disneyland, a must ride ride for anyone who is a child at heart.

Benjamin Hoff’s version of Mr. Milne’s character shows Pooh at his spiritual fullness as an uncarved block in the Tao of Pooh.

For the joyous times given to multitudes of children, all from a “silly old bear”… we gratefully remember AA Milne .
Posted by Kate OMara at 8:19 AM 1 comment: 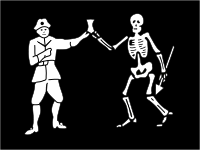 Bartholomew Roberts started his career as a seaman with no hope of moving up in responsibility or pay. When the opportunity to become a pirate and a leader presented itself he took it.

An interesting fact about pirates of the Golden Age was that many were literate and wrote codes for the crew. The straightforward honest nature of these scoundrels offers a fascinating look into a code of honor long past.

A seaman wishing to join the crew was provided with the code to which he would agree to abide. Once an agreement was made the pay scale was equitable for the level responsibility, risk and effort. There was room to move up through hard work.

The captain acknowledged that he amounted to nothing by himself therefore he rewarded his crew appropriately, equitably, fairly. While the gains were ill-gotten, the split was fair.

Remarkable consideration in an age gone by…
Posted by Kate OMara at 8:53 PM No comments: 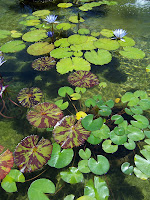 As much as the world changes, it remains the same. The individual story and the accessories change but the story of humankind: love, hate, peace, violence, these things are the human story.

One might think that with enough time and learning we too should move closer to the ideal of what a human being should wish to be, want to be, and become. But as much as we see two steps forward, it seems that we’re at least two steps back.

Who was it who said: Love your brother as yourself? And when was that…

The Golden Rule moves my spirit… I practice it daily to make it a reality not only in my small part of the world but with the hope that what greater people than I have said becomes the reality we all need so badly.

The awareness of what we do, what we buy, how we treat each other flows out like the motion of a water droplet onto a glass-like still pond, gives each of us an awesome responsibility. Everything counts.

If what we do not only impacts those immediately around us but around the world, how too does it impact the generations yet to arrive. What will you say when your children or grandchildren ask about the world you leave to them… because you were here is there more kindness… more generosity, more love?

Shouldn’t we say to our grandchildren, I was there when we conquered poverty, I contributed to eradicating pollution, it was my country that moved fearlessly into a better future, I sang in the streets when the Declaration of Independence and the Ideals of our 1776 forefathers became a reality. Wouldn’t that just be awesome to say that to your kids? What you do today makes a difference. Everything makes a difference.

It doesn’t matter how it’s said, but the following are words that help keep us on the road to a better future.

Blessed is he who prefers his brother to himself.

Do naught to others that which if done to you would cause pain.

What is hateful to you, do not to your fellows.

That nature only is good when it shall not do unto another whatever is not good for its own self.

Hurt not other with that which pains yourself.

To hurt them is not at all good. Beloved, then, hurt thou not any one’s heart.

Do unto others as you would have them do unto you.

With that I wish you prosperity in love and money, a fun filled and productive 2011 and lots and lots of chocolate and sunshine! ;)
Posted by Kate OMara at 7:58 AM No comments: