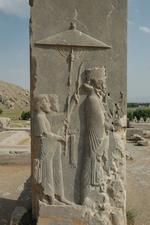 Xerxes was crowned King of Persia after the death of his father Darius. He was the first son born after Darius had ascended the throne.

As was common in Persia with the change of rulers, Xerxes was immediately challenged by revolts within his kingdom. He began with interventions in Egypt and Babylon followed by a full invasion of Greece.

Xerxes completed the unfinished building project left by Darius which includes the Gate of all nations and Hall of a Hundred Columns at Persepolis and the Susa Gate and palace.

Interested in ancient history? http://ancienthistory.about.com/od/xerxes/g/Xerxes.htm
Posted by Kate OMara at 2:00 AM

Labels: A to Z, History

It is so unfair that a new king has to face rebellion and people are uncomfortable with new people in the management.

Very nice X post! Persia had such an amazing culture. A shame so much of it was lost.

Thanks for this glimpse into history. :-)

To be featured in 300: Rise of an Empire, once again portrayed by Rodrigo Santoro.

X was a difficult letter for the A-Z. Xcellent choice!

I LOVE ancient history. If I had my way, I'd sit around studying it rather than doing productive things like, oh, folding laundry or cleaning dishes. =)

Darius is one of my favorites in that time period.

Isn't history amazing? Thanks for the post :) And for stopping by my blog! Great way to conquer the difficult letter 'X'.

Xerxes definitely has a cool name. Two Xs are just plain awesome, like xerox. Your posts are always so interesting. I do love ancient history.