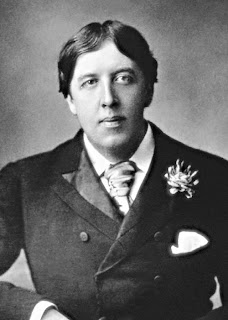 Oscar Wilde was the son of Sir William Robert Wills Wilde MD and Lady Jane Francesca Agnes Elgee Wilde, a writer. The Wilde home was known for the intellectuals and nationalists who frequented Lady Jane’s parlor. In this stimulating environment young Oscar learned French and German.

He attended Oxford where he became involved with the philosophy aestheticism. Later, he wrote articles and toured America lecturing about the Aesthetic Movement.

Ultimately, he became one of the best known playwrights and personalities of the Victorian Era.

Read more of the works of Oscar Wilde at: http://en.wikipedia.org/wiki/Oscar_Wilde_bibliography

I'll say! You know, I wonder what would have happened if he'd sat down half way through his first work and thought, "Nah. I'm not any good. I should do something more profitable."

I love seeing which random person will pop up on your blog next! :) And I love Crystal's comment.

I'm sure I read him in school, but not Dorian Gray or Earnest.