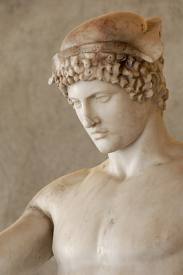 The son of Zeus and Maia, Hermes is the god of transitions. He moves between Olympus and the mundane world.

Invoked as a protector, his devotees included athletes, travelers, herdsmen and thieves. The conductor of souls to the after world, Hermes enjoyed the respect as a messenger and emissary of the gods.

Hermes' female admirers were many evidenced by scores of children. Some of his children became well-known: Pan, Eros, Cephalus, and Palaestra.

Devotees of God Hermes believe he is a teacher of secret wisdom which can be learned only through religious ecstasy. He also directs dreams to dreamers. He’s identified by his winged sandals, winged cap and his herald’s staff.

Interested in Greek Gods? Read more at: http://www.greek-gods.info/
Posted by Kate OMara at 6:00 AM