I = Isabella of Castile 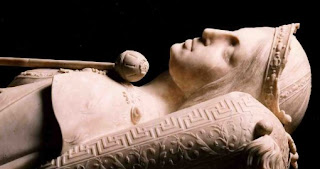 Isabella was the daughter of John II of Castile and granddaughter of Henry III of Castile. She survived her half-brother’s rule to become heir and rule the region with her husband Ferdinand.

Her early home life was tumultuous when her father died. She and her brother were sent into seclusion. Her half-brother Henry IV had a change of heart and brought his siblings to live with him. She eventually succeeded him.

Ferdinand V and Isabella were the 15th century power couple bringing resources together to stabilize Spain and explore the world via Columbus and other Spanish explorers.

As a Catholic, she was considered extremely devout. Her works include expulsion of the Jews from Spain. With the Alhambra Decree which required all Jews to leave within three months and to not take any gold, silver, money or horses with them upon their exit. With the influx of money she was able to easily fund the 1492 expedition to the New World.

To learn more about Queen Isabella visit the website: http://www.queenisabella.org/

She's one of my very favorite historical figures. I did a project on her in college and thought she was fascinating.

Happy A to Z posting.
pensuasion.blogspot.com

I'm terrible with historical facts, but I'm getting educated here, for sure.