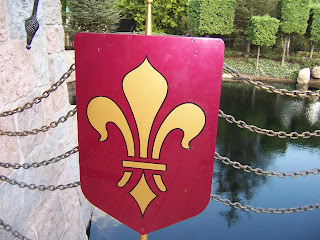 Fleur-de-lis is French for lily.

This enduring symbol has had many uses through the centuries. Of course, the most recognizable is the French monarchy who used the symbol within their heraldry. The heraldry helped families with their claims for the throne. French scholars date the use of the fleur to the 12th century, first used by Louis VI.

Medieval art work of religious icons often used symbols to identify the various patron saints depicted for the illiterate public. The fleur-de-lis in the hand or at the feet of a woman identified her as the Virgin Mary.
The petals of the lily became a representation of the traits: faith, wisdom and chivalry which represented divine favor. The relation to chivalry led the contemporary organization, the Boys Scouts to adopt the symbol as their own.

Today the remnants of the reach and power French monarchy is found included in familial coat-of-arms of their descendants. Descendants share their heritage by flying the fleur-de-list around the world in the English coat-of-arms, the flag of Quebec, the fleur-de-lis of Florence, flag of Bosnia and Herzegovina, and flag of New Orleans among others.

For more information about the fleur-de-lis go to: http://en.wikipedia.org/wiki/French_heraldry

I remember encountering the term fleur-de-lis for the first time when I read the Three Musketeers as a young girl. I loved the word. I thought it was one of the prettiest words I had ever read.

It is a pretty word. I hadn't thought of it that way before, but I agree with you.