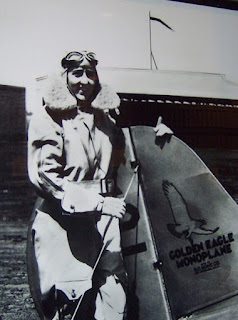 US Aviator license # 2613 belonged to Evelyn 'Bobbi' Trout, the fifth woman to be licensed to fly. She claimed her place in history as one of the participants in the Powder Puff Derby.

Born in Illinois on January 7, 1906, Evelyn set her sights on flying from the first time she saw a plane fly overhead. Her parents moved from Illinois to California where Evelyn had the opportunity to save $2,500 during her teenage years working at her parent's gas service station. She applied her money to flying lessons at Burdett Fuller's Flying School, obtaining her license in 1928.

By 1929, she and fellow female aviators competed to champion women's endurance flight. Howard Hughes and Will Rogers watched as the twenty women including Amelia Earhart, Pancho Barnes and Evelyn Trout powdered their noses before boarding their aircraft. The gentlemen dubbed the race, the Powder Puff Derby.

Pleased with their daughter, the Trouts gave Evelyn her first light weight plane in which she was able to set a number of records for increasingly long endurance flights, altitude records  and became famous for refueling during her longer flights. Her longest flight was 122 hours 50 minutes.. She was also the first woman to fly all night.

Through the 1930s, Evelyn flew around the country demonstrating airplanes and participating in races, sponsored by the Sunset Oil Company.  She continued to fly until WWII when she turned her attention toward entrepreneurial ventures. She owned a rivet company, a real estate company, printing company, insurance and investment company.
\
For more about Evelyn Trout go to: http://en.wikipedia.org/wiki/Bobbi_Trout

For more about the Women's Air Derby aka Powder Puff Derby go to: http://en.wikipedia.org/wiki/Women%27s_Air_Derby

sounds like quite an adventurous woman - smart and pioneering. Very cool little bio. Real life stories are better than fiction.

Thanks Joanne! Agree True life is better than fiction.