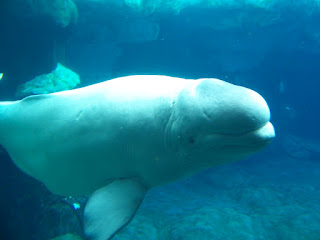 Known as the white whale, beluga whales or Dephinapterus leucas naturally live in the Arctic & sub-Arctic regions of the ocean, around Alaska, Canada, Russia and Greenland. Adult Belugas grow up to length of 16 feet and live to 50 years in captivity. They are stunningly white. The name Beluga comes from the Russian word ‘belukkha’ which means white.

Scientists refer to the Belugas as canaries for the high pitch sound they make. But the term canary is also accurate in that the whales are sensitive to pollution and serve as indicators of healthful or unhealthful environments, much like the mine canaries.

Beluga whales were the first live ocean mammal to be displayed in a permanent tank to the public in New York City. Since that time Belugas are periodically harvested from the sea to replenish the aquatic centers around the world. Researchers working with the whale have discovered that the whales are able to identify and have distinctive sounds for particular objects, giving the hope that someday humans and whales will be able to communicate.

Belugas swim at a tranquil pace and appear to be smiling most of the time. They are known to be playful with each other and their human handlers. In general, they are social creatures living in pods. However, belugas move from pod to pod increasing their social circles.

Kate, Awakenings has nominated you for the Liebster Blog Aware. Check it out @ http://awakenings2012.blogspot.com/2012/08/the-liebster-blog-award.html

Oh my! Thank you!

With an infrequent breeding schedule, the species is dependent on human conservation until its numbers are strengthened. Belugas only give birth to one calf every three years - an unsurprising figure considering gestation can last up to 15 months and offspring are completely dependent on their mother's milk for the first two years of life. Aside from their smaller size - 1.5 meters (5 feet) and 80 kilograms (less than 200 pounds) - calves are easily distinguished by their gray color.

Thanks ACE! I love learning more about Beluga Whales. I stood watching the one in the photo for several hours. She is amazing.

Visited you at http://acecoinage.com/ The animal awareness coins are beautiful.