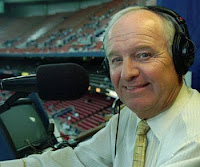 Most of the stories about Dave Niehaus this week talk about the man who worked as a sports caster, the Dave Niehaus I’ll remember was my neighbor. In fact, his family lived right next door to mine. Dave was the Dad. My best friend was Andy, Dave’s son. The Niehaus family profoundly impacted my childhood in a good way.

Of course, having your best friend live next door makes for a good situation. There were actually three of us who were best friends: Andy, Frank & me. I played like my friends. I had trucks, cars and a sand box. I changed into play clothes when I got home from pre-school. They told me, 'you're as fun as any boy.' But Mr. Niehaus said I was the pretty little girl from next door. Then he’d wink at Andy.

I don’t remember what I wore for Halloween the year we went trick or treating together. But Andy became a clown. Marilyn had made the costume; it was the “wonderfulest costume in the whole wide world." Marilyn was a really great mom. She said I could call her Marilyn which made my mom flip out. I remember thinking: Andy is so lucky to have such a nice mom.

Tomboys tend to get bumps & bruises when they’re acting out on the boy-part. Andy gave me my first black eye. He slammed the gate and I miss judged the distance…Boom, black eye. He felt really bad. I had a great story for school and recovered quickly.

At some point, the Niehaus family moved to a different neighborhood. I remember they invited us over but my mother said we didn’t have time to drive 'all the way over there.' So, I lost touch with my first best friend, the boy-next-door. But I never forgot Niehaus family.

I’m not a sports fan and while I heard the name Niehaus mentioned from time to time, it didn’t occur to me that it was the same Mr. Niehaus from so many years ago. Until this week, when they announced his passing and had photos online did I recognize my neighbor, the magician.

I wish Dave Niehaus well in his new Magical Place because he put magic into my childhood.
Posted by Kate OMara at 10:16 PM