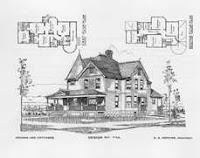 1890s large homes built for the upper middle class were classically constructed in what we call “Queen Anne" style. While our ancestor’s might have known most people ask: who is Queen Anne and why is this architecture her style?

Queen Anne 1665-1714, succeeded to the thrones of England, Scotland and Ireland in 1702 as well as the title Queen of France (1707). She lived in a politically and religiously tumultuous time. During this period the political two-party system developed: “Whigs” And “Tories.” In spite of closer heirs, the crown went to George I.

The exciting part of this period of English history was the developments in architecture. Classic Queen Anne buildings are notable by rows & rows of sash windows flush with the brickwork, stone quoins at the corners, rooms built two-rooms deep providing an inner chamber and sweeping steps leading to the door. This English Queen Anne style was commonly built into the 20th Century.

A hundred years later during the Victorian Era, Americans romanticized our collective English heritage and made the Queen Anne their own. With classic American disregard the once British Queen Anne style became an American home hardly resembling its British architectural predecessor.

Expected details of the interior of an American Queen Anne home include sweeping stairs from the foyer, with wainscoting throughout the public areas of the home. Private areas often included interior or double chamber space in the larger homes. Grand fireplaces placed throughout the lower areas with smaller fireplaces on the second floor provided warmth on the inside and contributed to the asymmetrical exterior style.
Posted by Kate OMara at 10:18 PM