Lizards in the yard 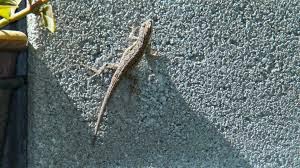 I screamed. I admit it. The lizard running out from under the flower pot not only made me jump but I screamed.

It moved like a snake. We lived in a snake zone for seven years. There were snakes in the front & back yards. The dogs were always hunting them. But this wasn't a snake, it just moved like one.

As a tomboy, my friends Frank and his brother Ed and I would run the hills hunting western fence lizards. Back then, we called them blue belly lizards. Granted we did catch twice as many tails as lizards but by the end of the summer, that lizard hunting summer, the three of us were more than proficient with catching those quick buggers.

So I screamed, I startled myself and the lizard. I realized it was just a lizard, I laughed. I laughed and grabbed a broom to chase the quick bugger away from my front door and back into the garden where he belongs. A lizard pet is one thing I'd done as a kid, a lizard in my house wasn't going to happen today.

The visitor was an alligator lizard. It moved in an undulating way. These creature from ancient times adapt to the environment. The lizard fact sheets state that alligator lizards are found in urban areas under pot and in gardens. They eat insects in large quantity which is why I'd like him to stay but over in the yard, please.