Reflections on the water 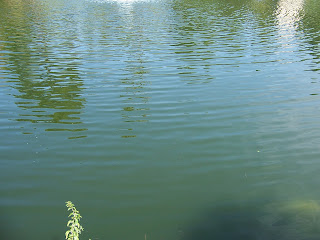 'Reflections on the water, like shadows in my mind, Speak to me of passing days and nights and passing time...' ~ Season Suite by John Denver

I find calm in watching the reflections on the water. There is something fascinating about the ripples, shadows and reflections that hold my attention to the point of calming my mind.

This is where stories are born...

From the depth of the water, the whisper rises up to the surface speaking of the secrets just below. 'Love,' says a voice. 'Hate,' says another. 'Choose,' says a third. 'Choose' sings the choir and the echo fades.

The choir begins with a quiet song, reaching crescendo before falling silent for seconds until the next song begins.

The beginning of the story comes into view:

The story of 'Pond' waits to become real in the not so distant future.

In the meantime, you may like to listen to the Season Suite http://www.youtube.com/watch?v=4q5197B_7iI

calm post in tune with soothing reflections and ripples. I never get tired of looking into a puddle, pool, pond, river, ocean, etc.

Me too Joanne. We must be kindred water spirits.:)

Thanks Sharla, it's one of my favorite places. There again today. :)

Forgot to mention a post on catnip you might enjoy (if you have not already read it). It is a short post but about reflection upon the water... http://catnipoflife.wordpress.com/2012/06/01/reflection-upon-the-water/

Thank you Sharla. I visited and believe we're on the same path :)