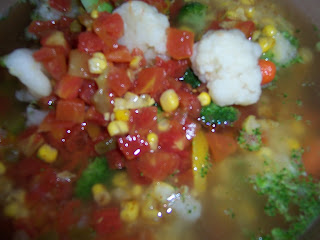 Once upon a time there were travelers who brought happiness and good times everywhere they went.
When they arrived in a new town, they would invite their neighbors over for Stone Soup.
"Stone Soup?" the neighbors' exclaimed. "Why would anyone want to eat Stone Soup?"
"Well," said Johnny. "It's a magical soup. It's different every time. Everyone always loves it!" Come by as I'm making it and I'll share the secret with you."
So Johnny started cooking his grandmother's recipe. He filled the pot with water and placed it on the stove.
Mrs. Jones was the first to visit first thing in the morning. "Can I see the soup?" she asked.
"No, but I can let you taste it." Johnny dipped the spoon in the pot & offered it to Mrs. Jones.
"It's a bit plain," she said.
"Is it? Well, what do you suggest?" he asked.
"I have just the thing, I"ll be right back."
Mrs. Jones dashed down the street and was back in a few minutes time. "Chop this and add it."
"Okay" smiled Johnny. Dinner will be ready at seven.
"I'll be here." Mrs. Jones smiled as she returned home.
Not three minutes passed when Mr. Singh came by. He tried the soup but he too thought the soup was somewhat plain. He had just the thing that would help flavor the soup. Mr. Singh returned with the ingredient.
Johnny thanked him and said dinner is at seven.
Just then Miss Chang arrived at the door.
The stream of visiting neighbors continued until everyone in the neighborhood had visited Johnny. It was noon by the time the last neighbor visited Johnny and his soup.
The soup simmered the rest of the day. The aroma wafted through the neighborhood. By seven o'clock, everyone was very hungry.
At seven, all the neighbors gathered together to share in the soup they had created. A good time (and dinner) was had by all.