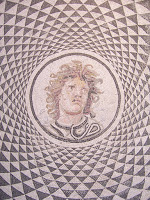 Medusa was the most beautiful of the Gorgons, the daughters of Phorkys and Keto. Her parents were the children of Earth called Gaia and Ocean called Okeanos.

Medua's beauty was her undoing. She was so beautiful that Poseidon would not take “no” for an answer. He found Medusa in Athena’s Temple and had her. Athena grew so outraged she vented her anger on Medusa. Athena changed Medusa into a snake-haired monster.

Athena wasn’t finished with Medusa. The goddess provided Perseus with the shield he used to outwit Medusa, ultimately beheading her.

When Medusa's head rolled, it became known she was pregnant by Poseidon. The children of the union were Pegasus and Chrysaor.

The Getty Villa displays a rendering of Medusa created in Rome 115 – 150 CE using tile to provide the illusion of spiraling circles, a representation of the shield designs from the period.
Posted by Kate OMara at 8:52 PM