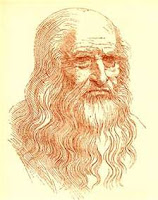 We understand that Leonardo Da Vinci loved animals. He understood they are sentient beings, they have feelings. He understood that it was not required to kill to have a healthy body. He knew this to be true and lived without eating animals in the 15th Century.

It is interesting that the act of killing any sentient being is brought together in this note as if he expects that one act leads to another. The act of killing, whatever it does within the soul makes the killer. There is no division in Leonardo’s mind.

“Truly man is the king of beasts, for his brutality exceeds theirs. We live by the death of others” (Leonardo Da Vinci 1452-1519)

He lived in a tumultuous time. The government was involved in several wars for control of resources. The brutality of war may have prompted this statement. We do know that war interfered with some of the project on which he worked.

Of course, he was a genius or perhaps because of his conviction he became a genius. Regardless, he had hope for the future and that ethical men will look upon killing as killing without distinction of species.

Vegetarianism is a legitimate lifestyle choice. It doesn’t mean that you’re conservative or liberal but it does mean that the temple of your soul (your body) is maintained in optimum health. Some of the health conditions prevented or improved are: