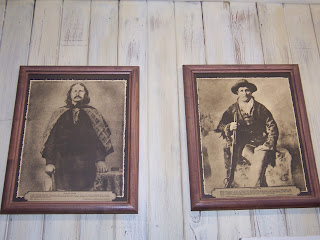 Born May 27, 1837 on a farm in Illinois, he started working as a stage coach driver at 18. The job took him out West where he worked as a lawman in Kansas and Nebraska. He joined the Union Army during the Civil War becoming a spy in Missouri.

After the war, Hickok returned to his vocation as a lawman. During the course of his duty he killed several men. Additionally, he was involved in other gunfights. In each trial he was acquitted.
Hickok was known for his quick draw in a gun fight. He used what is known as a cavalry draw. The holster hangs reversed with the butt of the gun facing forward. With a twist of the wrist while pulling the gun the pistoleer is ready in a split second. He wore the same guns from 1869 until his death. The guns were ivory handled Colt 1851 .36 Navy Model pistols. His revolvers were engraved J B Hickok.

According to American Legend Martha Jane Cannary also known as Calamity Jane, the two were married after they met in Fort Laramie. Although there is no documentation of the marriage, Calamity Jane confirmed their marriage in a newspaper article in the 1890s. She said she divorced Bill Hickok so he could marry Alice Lake.

Wild Bill was a part of an exclusive group of frontiersmen who became the heroes of dime novels. Hickok along with his friends, Buffalo Bill and Calamity Jane represent the mythic individualist of the American West.

Hickok was murdered on August 2, 1876 while playing cards at a Saloon in Deadwood, South Dakota. In his hand were Aces & Eights. He was 39.

For more about Bill Hickok visit: http://www.biography.com/people/wild-bill-hickok-40262
Posted by Kate OMara at 8:23 PM