Egyptian gods on the wall 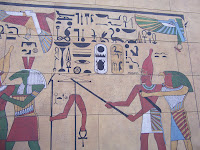 Powerful deities of the Egyptian pantheon are found on mural walls around the world.

Horus seen in his bird form or a man with a falcon head represents hunting and offers protection to devotees. The eye of Horus symbolizes the power of the pharaohs as they receive the power of the gods to rule the country. Horus is the god of Sky & Protection as well as War & Vengeance. During periods of Egyptian history, Horus served as the patron god of the nation.

Sobek, a fearful creator god, represented by a man with crocodile head protects Egyptians’ from Nile crocodiles. As a creator god, Sobek was so closely associated with Ra, he became Sobek-Ra. At the height to popularity, Sobek’s cult provided pools for sacred crocodiles and mummified their favorites for a blessed afterlife.

The stylized representation of Egyptian gods provide great subject matter for conversation while waiting for the show at the Egyptian Theater. It's always good to know tidbits of Jeopardy-esque trivia.
Posted by Kate OMara at 9:37 PM