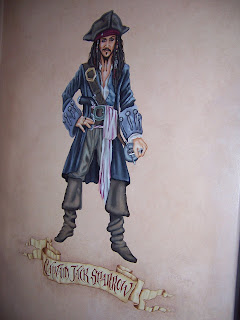 Captain Jack Sparrow continues to inspire people, especially young people, around the world to be a pirate... for Halloween, that is.

Some of the store bought costumes are quite amazing. The designers and manufacturers are increasingly imaginative. But I prefer to make my own. The best part of getting dressed up is putting the costume together.

Pirate costumes are particularly fun and cheap. Most people can put a pirate costume together from one or two closets with a minimal number of purchases. My pirate challenge this year was to outfit four pirates. We've got the crew thing going...

As Lady Captain it's my job to be stunning because I won't be the tallest but I must command attention! I'll be topping my outfit with a satin oriental jacket and some Aztec Gold.

The crew will be dressed according to their rank and value to the ship. All have similar striped pieces: socks or arm warmers, it's the only identifiable part of the gear that shows we're together. We'll be dressed in high-pirate fashion because there be a North wind a-blowin' here matey.

Sing "Yo-Ho" as you hunt through your clothes. Look at things sideways with a Jack Sparrow kind of sway. Remember these guys were interested in wearing top quality and yet, they wore it for long periods of time.

Pirates wore most or all of their jewelry. Why? Well, would you leave your valuables around a bunch of pirates? They were pirates, not stupid. So wear rings on all your fingers, several necklaces, pins, earrings, feathers, and hats.

Halloween is a night when flamboyant is good and being a flamboyant pirate is outstanding!

Read more about on of my favourite pirates:
http://www.teachshole.com/
http://www.squidoo.com/morganthepirate

Read about talking like a pirate:
http://www.talklikeapirate.com/
Posted by Kate OMara at 6:36 PM

"They were pirates not stupid" XDDDDD
Ha, ha, ha.

I remember being a kid on Halloween was a good time, but creating the outfits for my daughter was a blast . . . a second chance to be a kid! I always had an outfit, (who wants to be just the lady with the candy?) and have especially fond memories of the matching clown outfits I made one year.

Have fun and go for the dark chocolate . . . more antioxidants!
Ginger B.
http://coppertopcollins.blogspot.com
www.gingerbcollins.com

I envy you all the ability to make more than the standard witch's costume. I am not at all artistic or gifted but would love to see it when you are all finished!

Thanks for visiting my blog, Kate! I was so happy to hear that your kids enjoyed my story. My little guy enjoys Halloween more than anything, so I really liked reading your "Halloween Thoughts."