No Such Thing as Adolescence 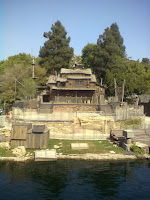 This subject really caught my eye. It all started with the email mentioning the latest report

"RE: Have you read the latest? The adolescence years go up to age 25 now."

Historically, there was no such thing as adolescence. You were a child or an adult. Teenage years or adolescence was a phenomena of the 20th Century with the increased ability of families to keep offspring immature and not responsible.

The natural progression of life includes spiritual rites such as bar-mitzvah or confirmation into adulthood at 13 -15 years old. As full members of the the church young men were able to start working to pick a wife and create families.

In more societies than not, the process of accumulating enough assets to provide a home and a living with learned trade or mercantile would take the average young man five to seven years before they were able to start courting, or arrange for a marriage. So about somewhere late teens or early 20s, many young people were selecting the mates. We see this in historical documents throughout Western Civilization, until the late 20th century after WWII, when marriage age increased and first time mother's age increased.

Ultimately, it's cruel to delay adulthood in society when both historically and physically adulthood occurs with the hormonal changes makes us ready for reproduction.
Posted by Kate OMara at 2:38 PM

Growing in the Green said...

So true...I ponder these things often myself.

An excellent set of trainers, perhaps not just about the most gorgeous, not the costliest, nor is the emblem name, having said that it can take want you to tour everybody, Christian Louboutin Sale
resolve take pleasure in the happiness shoes usually do not fit, perhaps enviable,nevertheless the injured indeed.Asics Shoes Australia
An enormously situation you'll want encountered, walked all around while you're watching display cabinets in countless types of shoes the thing is dazzling, absolutely no way to decide. The charge is in line is not beautiful, like pricey, comfortable work through fashion, feel good-looking men and women who think old-fashioned ... in order to be completely contented with simply difficult. Pick to decide on, finally opted for a pair, wear a few days to find foot wear, or not a way to enhance their clothes,Christian Louboutin Outlet
learn how to accomplish that time? To offer up'd rather painful to always wear?