The trivia game provides light and memorable information about a variety of places from Boston to Auckland and man places between. Selecting silly ways to kidnap a friend, the kidnapper selects the target and sends a message:

You’ve just been kidnapped to:

Escaping involves selecting one out of the three answers provided to a trivia question, points are awarded to move through the game to higher levels. First guess correct awards 100 points, 2nd guess correct awards 50 points, get it wrong and you still escape but your kidnapper gets the points.

Kidnap is an ongoing game to challenge players in reading comprehension and trivia memory retention. I like it because it’s another way to interact with my illusive teenagers are otherwise engaged in internet communications.
Posted by Kate OMara at 7:40 PM 2 comments: 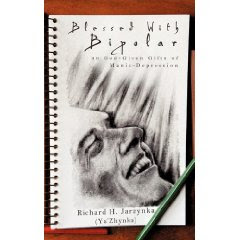 
Blessed with Bipolar is a decidedly fundamentalist Christian memoir, with the author telling of his ability to speak in angelic language or tongues when in prayer. He reminds the reader of his fervent Christian beliefs via paraphrased arguments with a friend, Ephraim and an anonymous professor who engage him with questions about Christianity. Jarzynka’s Christian faith clearly serves to sooth the extremes of his personality.

Richard Jarzynka doesn’t mind being called crazy, screwy, goofy, or loony, if fact, when he’s in a good mood, he apparently has a good sense of humor. The trouble is his moods can get completely out of his control and swing from jovial & energetic to angry & abusive in the blink of an eye.

The gifts of being a manic-depressive number at least 36 according to Jarzynka. Even with medication, Jarzynka recounts periods of ups and downs: increased energy and bursts of thoughts then the blues and inability to function for days at a time. Truly the swings are severe. As he tells his story it becomes obvious that he is not only a highly intelligent man but also quite sensitive and caring. Not unlike the description of Ludwig von Beethoven who was known to scream in fits of anger then apologize profusely and repentantly create fabulous music during energetic episodes.

Still one wonders perhaps if Jarzynka attributes more than is necessary to his bipolar status. In some of the instances he tells of his confrontations with people, authority in particular. Without witnessing or having the other person’s side, it would seem that he was just standing up for himself or for others. While this is out of the ordinary for the average person to confront authority, I don’t know that I would attribute it to his bipolar status but more to an innate sense of justice and tremendous bravery to stand up with someone else in the face of a frowning authority figure.

By 46, he earned merit-scholarships, athletic scholarships (the ups) and suffered not only hospitalizations but also intense discrimination (the downs) which culminated in his expulsion from law school and subsequent defeat in fighting the authority of the Dean to do so. A principled man, Jarzynka tells how he has overcome the devastation of his condition which he considers God-given and has turned his bipolar nature into a testimony of faith and shares his time and insight with others as a testament of God’s love for each unique individual, regardless of quirks, or idiosyncrasies.

Christian Inspirational memoir based in Assemblies of God philosophical approach.

There may be a time when perhaps we chose a direction or a philosophy that doesn’t work or that works for time, then ceases to work. Return to the study of solutions to find what may work better, then, take what you like and leave the rest.

It is in this way we learn not only from our own experience but gain the experience of untold previous generations. Some lessons need learning on a personal level. However, if one is properly trained much of the steepest part of a learning curve is transmuted to logical steps in the explanation of the current process.

For example: the learning structure of artisans, craftsmen, tradesmen for centuries has included the process of Apprentice to Journeyman to Master.

The Master assured the work by the employer or Monarch (as the period would call the powerfully rich). The Master employs journeymen and apprentices. Journeymen could be trusted to their level of expertise dependant often on the time and dedication exhibited to a particular skill. Apprentices were those often considered neophytes within the trades until the fifth year of their training.

Masters were entrusted with the project as well as the training of the next generation because it was to the Masters benefit to train his workers to serve the employer/monarch to the best of their ability. Tradesmen were respected as seen when the Master Craftsman would be invited to the Monarch’s table. Russian Monarch, Peter the Great spent a number of years as an Apprentice Wood Craftsman because he so respected the Trades.

Monarchs understood that the infrastructure of the city/state were dependant on the long-standing tradition of the Master-Journeyman-Apprentice Craft/Trade structure and supported it by paying appropriate sums, as in the “you get what you pay for” truth of economic philosophy, with regard to maintenance and building projects. When grand projects developed or catastrophe required major renovations to the city infrastructure, Crafts/Tradesmen were ready, and able to complete the projects within the stated budget, on schedule, as a sign of their expertise.

Analysis of 21st Century infrastructure problems as well as public and private building decay can be directly traced to the 1980 recession when the economic decision was made to restrict training practices of the building industry (via the national policies of deregulation and legislative restrictions on Unions and Trade Associations) which in effect stopped apprentice training in the early 1980s.

Since that time, the process of pulling maximum profits off the top of building projects or restricting bids to lowest bidder obtaining the project contract, has served to employ the unskilled laborer to render construction projects with inferior materials while producing increased waste due directly to lack of training/knowledge. Comparison of architectural plans to the balance sheet and the current condition of buildings and infrastructure proves this line of thought was monumentally wrong.

The Masters of the 1980s are likely very old or dead. Time-Vested Journeymen of that period are retired. The few Apprentice/Journeyman of the late 1970s or early 1980s are the only hope to rebuild the Crafts/Trades so badly needed in every city/state across the country.

Society needs to recognize that these men (and some women) have been treated with forceful, concentrated, and extreme disrespect for many years. To call them into service, if they are willing, will first require the mindset of society to change. Respect the Trades, pay them extremely well and the benefits to society as a whole will far outweigh the bill.

Because if you take what you like and leave the rest… history shows that infrastructure is better, public and private buildings are safe and better built when the trades are respected and paid well.
Posted by Kate OMara at 6:21 PM 2 comments:

As a student of history, I’m always amazed at the way life plays out and the ignorance of some to understand the basics. In science & philosophy: if THIS is true than THAT will happen. In mathematics: a+b=c. In folk stories: you can’t get blood from a turnip.

J Edgar Hoover had a hard-on to stamp out un-American business practices as his agency defined what was ethical i.e. American. He saw that unethical was legislated to illegal and therefore was un-American. Under this category were business practices that included the sale of intoxicating substances and extortion, racketeering, loan sharking, etc.

Today, a credit card customer may be reminiscing the by-gone days of paying back loans or credit debt at and by the terms and rates they originally negotiated and agreed.

As it happens, a credit card given by a now bought-out bank offered 8.9%. TCM Bank bought the bank and all the credit/debt contracts, they tried to change the rate but said if the account is closed the 8.9% is fixed until the closed account is paid off. So of course, the account is closed. Not knowing how to honor their word, they’ve changed the rate again and refuse to change it back. Even though there is record of contact and regular payments, never late, TCM Bank changed the rate.

Today, the Customer Service Department, don’t you feel sorry for those schleps, said that the credit manager, who doesn’t take calls and their supervisors who don’t take calls, can only change rates higher. Once rates are changed higher, they won’t change them back to the agreement. The account has been noted and he’ll put in a request but the credit department denies all requests by customers to maintain agreements. It’s 3-5 days until the denial will be marked on the account.

The customer service supervisor said that the only place he knew that customers can take any grievance is the Better Business Bureau. So BBB is the only recourse. http://bbb.org

The Better Business Bureau web site is fabulous! Consumers should use this site regularly. It’s user friendly. Not surprisingly, TCM Bank popped up with all three of their addresses listed. Apparently, this is not the first agreement they’ve failed to honor.

Please allow Guido back in business because when you made a deal with Guido, it was a deal. He didn’t change the terms. History will record that loan sharks were more honorable than so-called American banks and lenders are today.

Sincerely,
Every American Consumer
Posted by Kate OMara at 10:04 AM No comments: